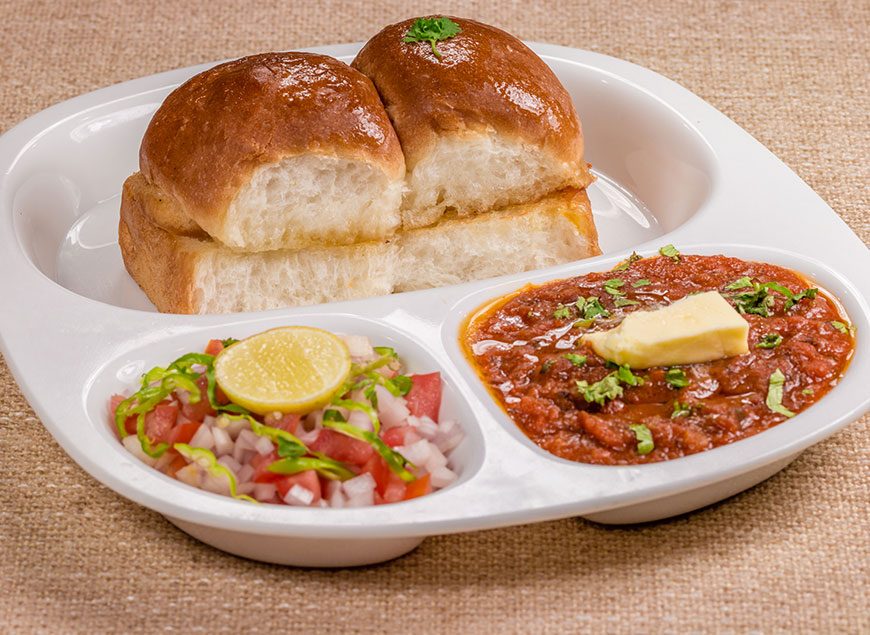 The Origin Of Pav Bhaji

Arguably one of the most delicious creations to come from Mumbai, Pav Bhaji has an avid fan following.

But did you know that it was only introduced as a quick meal solution at first? Keep reading to learn more about the story of Pav Bhaji!

Pav Bhaji is every Mumbaikar’s favorite dish. Any foodie who loves Indian cuisine swears by its lip-smacking deliciousness! And trust us, you won’t be able to argue against it once you have it yourself. Just the mere mention of Pav Bhaji will make you drool.

So now that you’ve placed your orders on rajbhog.com let’s continue learning about Pav Bhaji or Pau Bhaji.

The History Of Pav Bhaji

During the American Civil War, there was a huge demand for cotton in the market. This kept the traders and workers at the Bombay Cotton Exchange and textile mills very busy. Due to the time difference, the traders used to stay up till late in the night dealing in the USA market.

The busy work routine and unfavorable hours had a toll on their everyday meals. Hence, they started looking for options around their workplace to appease their hunger.

This was when local street food vendors started working at such hours to meet the demand. But due to the odd hours and unavailability of ingredients, they couldn’t keep up with requirements. This was when one of the vendors decided to make this unique dish.

At first, he started using all the vegetables he could find to create a mashed thick vegetable curry. To make it more flavorful, he added loads of spices and flavor to it. He also borrowed some soft bread rolls from the nearby church to serve with ‘bhaji’. Learn more on this.

Slowly, every other vendor started picking up this trick to make their own version of it. That’s how they ended up making the amazing Pav Bhaji! Considering the convenience of having it and filling it, Pav Bhaji became a major hit in the vicinity.

So much so that vendors everywhere across the city started picking up on it. And in a few years, everyone in Mumbai was introduced to the delicious dish!

The Types Of Pav Bhaji

Pav Bhaji can be found all across the world. It’s also easily available in the USA. But everywhere you go, you will find a different version of it. Be it in India or the USA. So let’s learn about some of the famous types of Pav Bhaji you can find around the world.

These are the most well-known versions of Pav Bhaji. But there are still many other varieties of Pav Bhaji that you may find all across the globe.

Your Story With Pav Bhaji

Pav Bhaji is commonly made in every Indian household using various brands of Pav Bhaji Masalas available in the market. But it’s difficult to replicate the authentic flavors you can find in its state of origin, Maharashtra.

You can get the most authentic buttery goodness of this dish from rajbhog.com. You can also find it at your nearest Rajbhog Cafe. Just stock up on it and relish it whenever you want from the comfort of your home!

The Gems Of Punjab

What Makes Rajbhog Foods A Preferred Indian Food Brand In The USA?

Add An Indian Twist To Your Thanksgiving Celebration