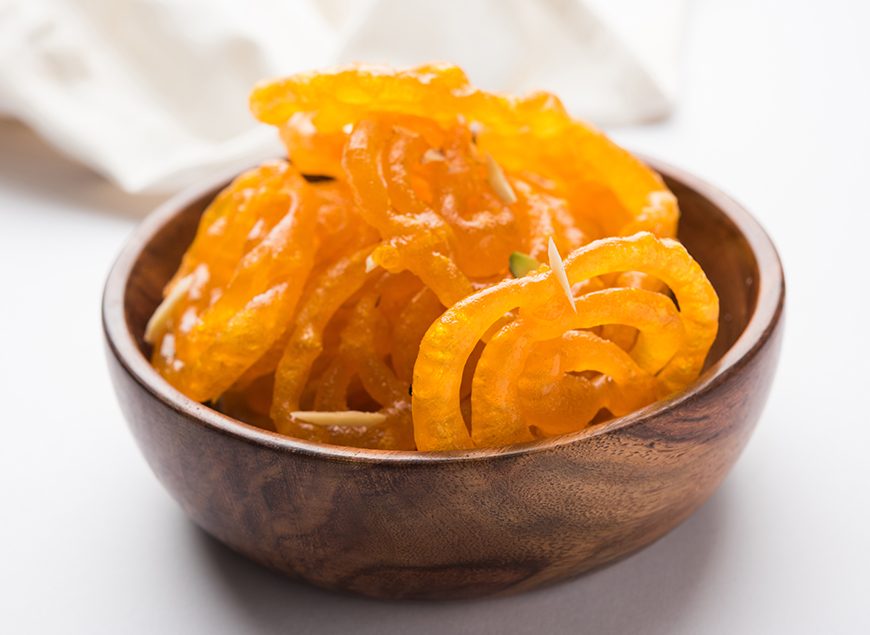 The Journey of Jalebi

The all-time famous Indian Jalebi is a favorite spiral-shaped sweet treat of many. This delicious sweet is closely attached to Indian cuisine and culture. But do you know that the origin of Jalebi is not from India? Read this blog to know about the story of this delicious Indian sweet dessert!

The spiral-shaped sweet delight Jalebi is relished by Indians worldwide in various ways. It is mostly loved as a sweet or dessert after a sumptuous meal, as a snack alongside chai and samosa, or with a breakfast of poori sabzi. Indian Jalebis are consumed alone or sometimes with rabdi, hot milk or curd! The rabdi Jalebi combination tastes heavenly.

Out of all the delicious desserts of Indian cuisine, Jalebi comes under the fried sweets. The taste, texture, and beautiful structure of Indian Jalebi entice people so much that one cannot resist the temptation to grab a bite of this crunchy delicacy. Once you do that, there’s no turning back, and you will keep on wanting more and more.

Keep scrolling and learn about the sweet story of Indian Jalebi!

The inception of Jalebi:

Jalebi came into existence long ago, especially in the West Asian or Iranian cuisines. In those parts of the world, Jalebis were commonly known as Zalabiya or Zolbiya during the 10th – 13th centuries. It was a trendy festive sweet treat in Iran, and it was specially served to the poor during the holy month of Ramadan.

From Zalabiya to Indian Jalebi:

The Turkish and Persian invasion of India is a significant event that marks the entry of Jalebis into Indian cuisine. It is believed that these invaders brought this sweet treat into the country. Shortly after this sweet was introduced, its popularization increased, and since then, it has been an integral part of Indian sweets and desserts.

But did you know that even after its introduction, Jalebi was known as Kundalika or Jalavallika? Yes, until the 15th century, the sweet was commonly known as these names. The Jain author Jinasura was the first person to coin the name Jalebi, and it came to be known by that name since then. Interestingly, this became the name still commonly used by people worldwide. Additionally, Indian Jalebi is the most famous form of this sweet treat out of all its forms across the world.

Involvement of Jalebi in Indian cuisine:

It is a significant fact that Indian festivals and occasions have some specific sweets that are served as specialties of the events. But it is not the case with Jalebis. There are no festivals with which Jalebi is closely or precisely associated. Instead, there is a wide range of festivals and occasions where Jalebi is included. It has made its way through as a snack and a sweet treat. Indian Jalebi is considered a welcoming addition to any feast table.

Jalebi in other parts of the world:

Regardless of its fame in India, Jalebi is widely relished in various countries. So let us find out how it is made or consumed in other parts of the world.

The homeland of Jalebis, Iran, is the main Jalebi junction. Jalebis over there are made of rosewater syrup and honey. They are also topped with saffrons for the authentic flavor. Iranians serve Jalebis during Nowruz, which is the Persian new year, and during Ramadan.

In Arab countries, the Jalebis are made in a slightly different way. Their Jalebi ingredients include yogurt, flour, yeast, honey, or sugar syrup, and sometimes they use cardamom for a richer flavor and essence.

The distinct flavors and appearance of Jalebi make it stand out from the plethora of sweet dishes the Indian cuisine boasts. We at Rajbhog Foods offer you two authentic and distinct choices of this sweet delicacy in the form of Yellow Jalebi and Orange Jalebi.

So what are you waiting for? Are you confused about where to buy this delightful treat from? Then you should immediately stop worrying and visit a nearby Rajbhog Café or grocery store and grab your favorite version of Jalebis.

You also check out our wide range of sweets that are even more than you would find in a typical Indian sweet shop. You can also order online from our website and get your favorite sweets delivered to your doorstep. Grab your favorite Jalebis now!

The Origin Of Pav Bhaji

Must-Haves During Your Navratri Fast

5 mouthwatering dishes you can make with Indian Bread

Ladoo – The King of Indian sweets

Popular Indian Desserts To Add Some Sweetness To Your Meal